Early Morcom/be locations and movements in the West Country

Eighteenth century mining in Cornwall and Devon were characterized by a cycle of boom and bust. Mines would be opened up, and then closed, and replaced by new ventures as the ore seams ran out or the industrial demand for a particular ore increased or decreased. Sometimes a mine could survive by exploring deeper for a more profitable mineral. This also resulted in the regional centres of mining changing over the decades. Consequently there was frequent migration of labour, miners seeking work elsewhere and, if successful, being soon followed by their families and relatives. After 1750 copper and lead production became increasingly dominant, peaking in the 1850s and declining gradually until about 1866, and rapidly thereafter. The decline in the Camborne/Redruth/Gwennap mines in the 1850s and 1860s was balanced, to some extent, by the growth of the eastern copper mines, especially around St Austell,St Blazey and St Clear, in the Tamar Valley and around Tavistock. Between the 1870s and the early years of the 19th century, copper continued to decline, being temporarily partially replaced by some growth in zinc, arsenic, manganese and tungsten. Tin production continued to decline.

Early dominance and subsequent decline of the mines west of Truro

This was mainly the area around Gwennap, Redruth, Camborne, and Illogan, the first parish alone producing one third of Cornish copper by 1800. Most of the copper production was within eight miles of the summit of Carn Brea and could be viewed from that isolated peak. Less important clusters of copper mines were around Crowan and Gwinear. In the far west, St Just, where mines stretched far out under the Atlantic, produced tin as well as copper. Tin was also produced, in the early 19th century in Wendron, Breage, St Ives, and St Agnes in the west, and around St Austell in mid Cornwall. After the mid-century most of these mines closed down, and the remaining tin production was mainly concentrated in Camborne and nearby Illogan. By 1871 Camborne and Illogan parishes accounted for one in seven of male miners in Cornwall, their share increasing to one in three by 1891. By that year there were only three districts where more than half the labour force were miners - Illogan, Camborne and St Just. In the second half of the 19th century, mining continued to be an important part of the local economy in Calstock in the Tamar Valley) , Breage and Gwennap, though much reduced from its pre 1850s peak.

How far did these trends affect MORCOM/BE families?

I have yet to research in sufficient detail the pattern of individual and family movements within the West Country, but in entering data into my ONS database, I have observed certain trends. There was certainly appreciable movement of mining families from one mining centre to another, and after 1850, this was most often to East Cornwall and Devon. The miners and engineers were also the families who were more likely to move elsewhere in the UK, apart from London. Families in non-mining towns and agricultural areas, when they did move, usually did so within short distances as a result of marriage or job seeking (e.g. farm labourers and domestic servants). If they migrated within the UK they were most likely to seek better opportunities in southern counties with the largest numbers moving to London, Plymouth and to a lesser extent, the Portsmouth area. Young men and girls were often employed as servants and laboureres in farms fairly near home, but well off employers preferred not to have people from neighbouring families as servants because of the danger of local gossip.

How were the MORCOMs distributed in Cornwall and Devon by 1881?

The maps below show the distribution of the MORCOMs, mapped by actual numbers in each registration district of the 1881 census, and also calculated as the density of the surname per 100,000 of the total population. Variants are disregarded, but would have been less common by this time. The maps are a "snapshot" at a time when there had already been large scale outflow to other UK counties and to overseas. The eastward movement of mining communities was well established by 1881 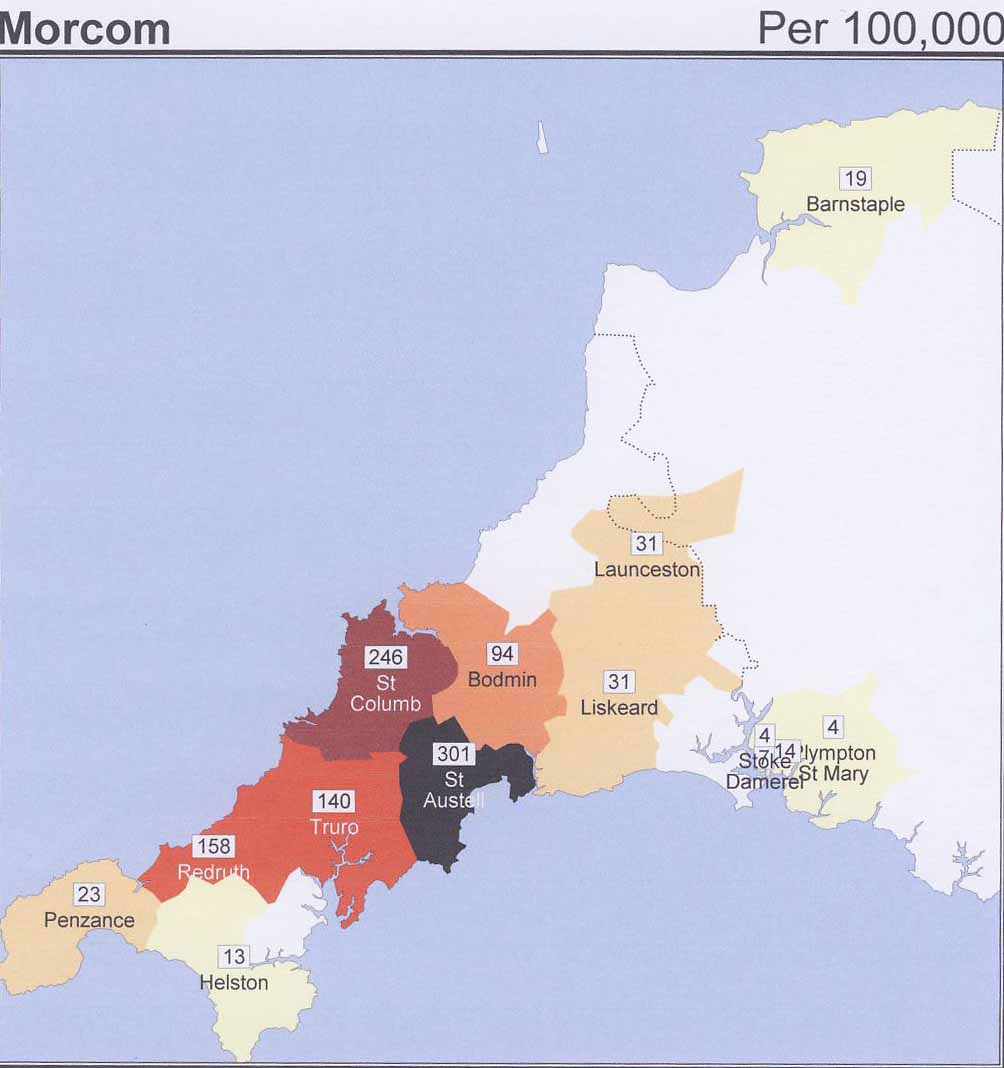 These maps are created by The Surname Atlas.

To the next section - Why did so many Morcom/bes leave the West Country?