Some places where Morcom/bes settled abroad

This section is a long term project, so I am only including a sample description here. These accounts will describe the Cornish/Devon communities in selected places, but will not describe the personal experiences of MORCOM/BE families who settled in these areas. At the end of a place description you will find a list of the MORCOM/BE families who had at least a few members who lived in the place. Additional information on the place will be found in the entries for individuals and, if available, the descriptions of their family in the section Some brief family histories. 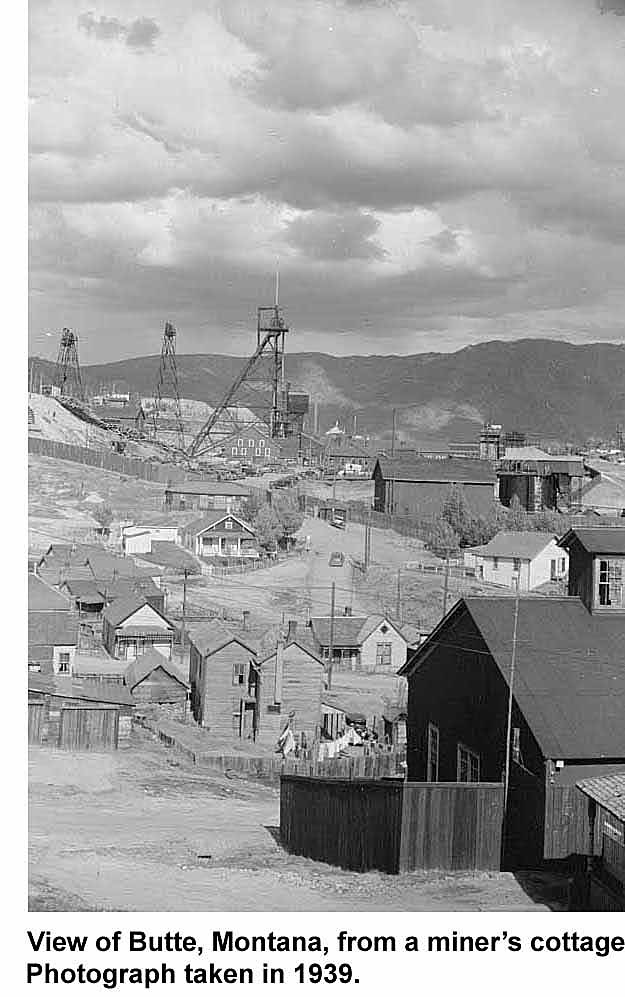 Development of mining in Butte

In 1864 alluvial gold was found in the Butte area in the remote northwestern Rockies. From a peak camp population of 500 in 1867, there was a decline to 200 in 1870, largely caused by shortage of water. Silver production was more important in Montana after 1875, and the number in Butte began to rapidly increase once again. By 1880 at least 50 Cornish miners were listed in the Federal census of 1880 for Butte, of which only half a dozen were accompanied by wives.

Copper, which became the dominant product of the state after 1885 was a mineral the Cornish, both from England and from Michigan, had most experience in mining.. The Cousin Jacks started arriving in much larger numbers, predominantly working in and around Butte, although some also went to the Drumlummon gold lode in the Marysville district (NW of Helena) between the 1880s and 1890s. The mining expanded when The opening of a large smelter at Anaconda meant that it was no longer necessary to send the ore to the Swansea smelters.

Many miners in Butte died in their early forties of phthisis (= miner's consumption) contracted from breathing mine dust for the 20 to 25 years they had worked in criminally unventilated mines. This disease usually crippled miners for months or years before they died, and accounted for far more deaths then mine accidents. The only treatment was usually quack medicines in bottles labelled "Sure Cure for Consumption". The early death of the main breadwinner often left mother and children impoverished and undernourished with little resistance to disease.

The copper seams had been found beneath the silver strata. Heart disease caused by the strain of ascending and descending mine shafts also killed many. The contrast between temperatures of 125 degree F. deep underground and sub-zero temperatures when the miners were walking home, caused many deaths from pneumonia. "Butte got the reputation of having more citizens in its cemetery than anywhere else". The infant mortality rate from still births, diphtheria, measles, scarlet fever, meningitis and other causes was particularly high - though possibly no worse than in Cornwall in the same period.

Unions and the Cornish

In Montana and elsewhere the Cornish were not generally active in union affairs. The Cornish tribute and network system had accustomed them to make their own bargains with mine owners, and they had been used to simply move on to another small independent mine if they were not satisfied with a deal. This was made easier by the possibility of turning to farming their small holding for a time. In America miners, without accompanying families, could also move on particularly easily. The Cornish miners were slow to recognize that only unions could bargain effectively with the corporations which owned many large American mines.

The union was seen as a fraternal society like the Sons of St George and the Independent Order of Good Templars. The average standard of living for miners in Butte by the 1890s was significantly better than in Cornwall, and this also reduced union militancy among the Cornish. Working class unity was made more difficult by conflicts between different national groups - the Cornish and Irish sometimes even coming to blows in Butte and elsewhere. This conflict was partly fuelled by Catholic and Methodist bigotry. Fortunately they were not often employed in the same mines, as rival owners employing men of their own faith.

Some married miners took mistresses, and in one case, a miner, when his common law wife died, sent a ticket for his wife to join him and look after his five children. With no prospects in Cornwall, she used the ticket to travel to America, where she married another Redruth miner!

MORCOM/BE families some of whose members settled in Butte

To the next section - Suggestions for further research